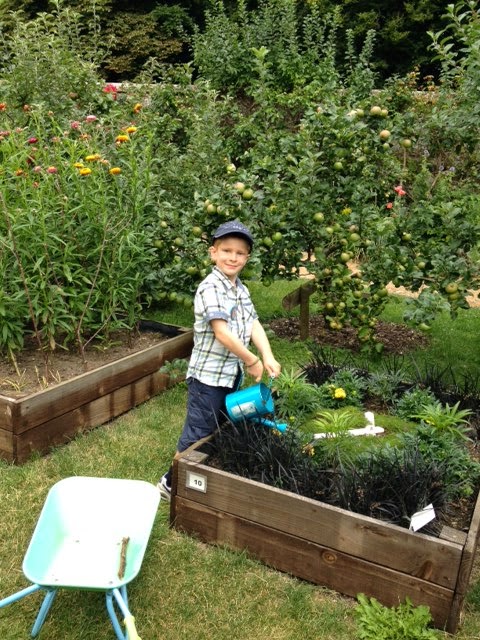 I LOVE the end of summer and the beginning of Autumn.  Such an abundance of food out there, ripe for the pickin's and a lot of it free (I don't just mean the scrumping that goes on within the fences of my mum's back garden either).  I'm not a great gardener myself; I think I like the idea of growing one's own goodies but when it comes down to the hard work, I always have something else to do.  We always manage to grow a few lovely tomatoes tho and this year was no exception.  Some nice big, fat, juicy, neigh-ugly tomatoes, the type that you will not find in any British supermarket but are the best you've ever tasted.  When I say "we", of course I mean the royal we, as my step-father provides the plants and hubby and I merely shove them in a bag and try to remember to water and feed them from time to time.  I am also lucky to have a neighbour (have I mentioned her before?) who is in with another neighbour, who has an allotment.  In exchange for bread and the odd kitchen experiment, she often furnishes me with some of the excesses that 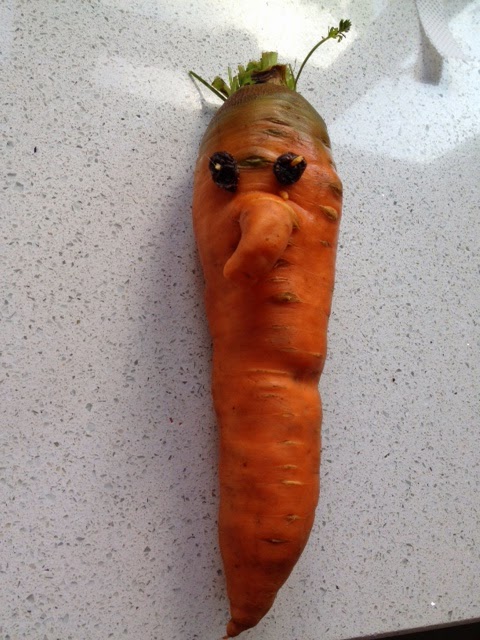 our keen allotment keeper cannot manage. I've had marrows (in fact still one and half in the fridge) apples and my favourite was 9 cucumbers, some of which I turned into some delicious bread and butter pickles.
I also have a dear friend who lives in Banbury, whose darling husband started an allotment a couple of years ago from scratch and is doing exceptionally well for a novice grower.  Two weeks ago, he gave some lovely potatoes and about 4 carrots (authentically will all the soil on).  Only 4 carrots I hear your cry?? These things were enormous, and we are still enjoying them to this day.  (The photo doesn't do it justice, it was about a foot long!!) 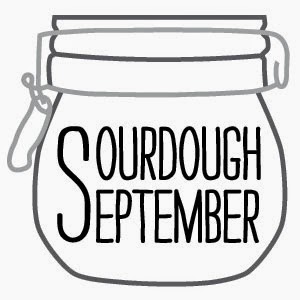 Anyhoo, I digress, as per usual....
We are also deep in the heart of Sourdough September, a completely made up festival by the Real Bread campaign, to raise awareness and celebrate this massively under-rated Elixir of life.  Hey, just look at me, I eat tonnes of the stuff (truly), I am never ill and I am not overweight. I don't even bother with the gym now (although I am still quite active, what with all the baking and cooking and stuff). My little family are never ill either.  There has to be something in that, right??

And I was also working out a few figures on the back of a fag packet (metaphorically speaking) and I worked out that if the average family bought 2 loaves of sliced bread every week from a supermarket (the ones sold in plastic bags  that are devoid of all nutrition) it costs around £200 per year.  HOWEVER, if the same family baked their own bread, using quality organic flour, it would cost less than half of that amount.  So what would you do if you were handed an extra £100??
Book yourself on a Real Bread Course with me, and I'll give you the means to never have to buy a loaf again. (Check my Power to the Flour page for information).

One final thought of the day, I also did a little thing on bought oven chips compared to buying actual potatoes and making your own oven chips using the tiniest bit of rapeseed oil; the percentage saving is pretty similar. Next time, I'll show you the cheese I made and my raspberry infused vodka...!

Ok, so I am making a commitment to all you bread fans to include a weekly menu, which will be updated every Monday.  It will list all the loaves that I will be baking for the up-coming farmer's market, together with a price list.  If you can't make it to the market but are tempted with the goodies on sale, then drop me a line/text by Thursday, with what you'd like me to save.  If you would like 2 or more loaves, please let me know by Wednesday; I'd rather not have an empty stall!  I am also running a limited offer on Mrs Middleton's cold-pressed Rapeseed Oil;  DO NOT MISS OUT!  This won't last for ever.  Please see this week's menu for more information and don't forget to check back every Monday to see what you fancy for the following week.